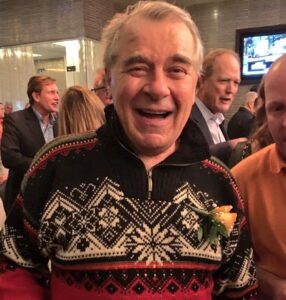 Flyers Hall of Fame member Joe Watson is retiring after 54 years working for the Flyers organization as a player, scout, training camp instructor and, since 1985, on the business side in the Marketing and Sales departments. His undying passion for the organization has been rivaled only by the likes of Bob Clarke and the late Ed Snider. Being a Flyer, to Joe, is a badge of honor and responsibility for representing the crest the right way.

With the exception of the three months he spent playing for the Colorado Rockies in 1977-78 before suffering a career-ending leg injury, Joe has been part of the Flyers organization for its entire history. He was selected from the Boston Bruins in the 1967 Expansion Draft, won two Stanley Cups as a Flyer, and was selected to play in two NHL All-Star games. Both he and younger brother Jim (a five-time NHL All-Star, two-time Cup winner and fellow Flyers Hall of Fame inductee) made their permanent homes in Philadelphia.

Joe will celebrate his 78th birthday on July 6, 2021. Even in retirement, he plans to remain actively involved with the Flyers Alumni.