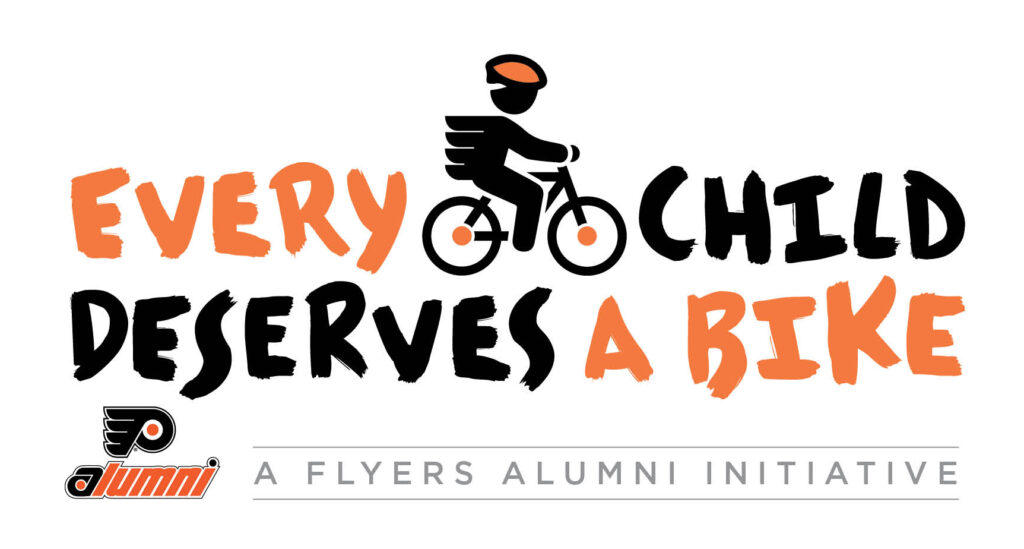 As the capstone event during the 2020 edition of the Flyers Alumni Association’s 12 Days of Christmas Giving program, the Alumni presented a customized bicycle to 5-year-old Lucy Brooks of Springfield, PA, on Dec. 24, 2020.
Help Hope Live, a charity based in Radnor, PA, was of invaluable help in connecting us with the Brooks family. Meeting Lucy and her Flyers-loving family and seeing the joy that her new bicycle brought to her and the family inspired Flyers Alumni Association president to create a new program, which we call “Every Child Deserves a Bike.”
Each month, with the assistance of Help Hope Live and through the generosity of sponsors and Flyers fans, the Flyers Alumni will present an adaptive bicycle — which costs roughly $5,000 — to a special needs youngster in the Delaware Valley. The bikes are designed to be operated independently by the user.
Here is the story of the very special little girl who inspired the “Every Child Deserves a Bike Program”: Lucy Brooks. 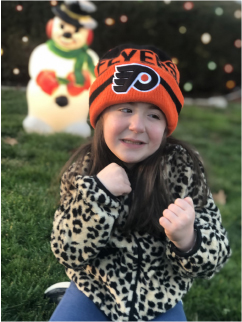 “We are so proud of her, and all that she’s done,” said Lucy’s mother, Jaclyn Brooks. “Her medical history is extensive and complicated. She’s been through a lot but she’s one tough girl.”

When Jaclyn was 28 weeks pregnant with Lucy, an ultrasound revealed a growth in the unborn ’s abdomen that complicated her lung development. Jaclyn was admitted to Children’s Hospital of Philadelphia (CHOP) to undergo further testing. Three days later, Lucy was born in CHOP’s special delivery unit. She had a rare condition called congenital mesoblastic nephroma; a rare renal tumor.

Within the first three days of her life, the newborn underwent two surgeries to remove a tumor and one of her kidneys because it was ensconced by the tumor. Lucy spent 95 days in the NI/ICU at CHOP and went home on Thanksgiving Day of 2015.

Unfortunately, when the baby returned a few weeks later for a checkup, doctors discovered that the tumor had begun to grow back, rapidly and aggressively. This discovery forced another emergency admission to the hospital. The baby received a Broviac line in her chest and began chemotherapy treatments. She was discharged on Christmas Eve.

Lucy continued to receive chemotherapy and underwent another round of surgery in April 2016 to remove the tumor once again. This was followed by additional chemotherapy and seven doses of radiation.

“She is happy and sassy most of the time, and she’s always ready to have fun!” Jaclyn said.

“We have been following up with CHOP since then and she has been good there,” Jaclyn said. “Lucy has been receiving physical therapy [PT] and occupational therapy [OT] services since she was very young. When she was around 2 years old, on a follow-up visit, a doctor mentioned she seemed to check a lot of the boxes for cerebral palsy [CP]. We didn’t know what that entailed but she started being seen in the CP clinic at CHOP and they diagnosed her with spastic triplegic cerebral palsy.”

Lucy’s legs and one of her arms have “high-tone musculature” (stiffer muscles), which makes it difficult for her to control her movements. This condition is not uncommon in babies born as prematurely as Lucy was. Additionally, her heart stopped during one of her first surgeries which led to damage, called periventricular leukomalacia (PVL) in a part of her brain which interferes with the messages the brain sends to the muscles.

“We have been working hard on stretching and exercising her as much as possible, but it is hard for Lucy to use some of her muscles. She gets around by crawling and using a walker, but she is still working hard on walking and even sitting in certain positions. She has received Botox shots in her legs and is on a daily medication to help with her muscle stiffness, but she has to work very hard every day to get around,” Jaclyn said.

Lucy, however, is a joyful and well-adjusted despite the many challenges she faced at the start of her life and the ongoing ones she deals with on a daily basis. She’s close with her siblings and wants to do whatever they do.

“Just an amazing little girl; very sweet and energetic. Really nice family, too. The fact that they are all diehard Flyers fans is icing on the cake. I’m just glad we were able to get the bike built for her and deliver it to her on Christmas Eve Day. Santa’s elves worked overtime on it and we picked it up and got it to Lucy just under the wire! In all seriousness, though, if we were able to do something through the bike that helps improve Lucy’s quality of life, that’s the least we could do. I also want to give a huge thank you to Help Hope Live,”  said Flyers Alumni Association president Brad Marsh.

Lucy’s bicycle, like all that the Flyers Alumni will present in the “Every Child Deserves a Bike” program, features a wide array of modifications designed to enable her to confidently and independently operate it.
“Lucy absolutely loves her bike! The bike has made it so that Lucy’s legs and arms are at a good position to move herself. It is awesome. There are straps to keep her feet in, so she doesn’t have to worry about using her muscles to hold them there and peddle at the same time,” Jaclyn Brooks said.

There is a high back on the bike seat, so she is supported and again doesn’t have to worry about using muscles to support her back when she is riding. It provides the right support but also great movement to use and strengthen muscles as she is having fun. The entire Brooks family — Lucy’s dad, Mike, her mom, Jaclyn, her siblings, and Lucy herself — are all big fans of the Philadelphia Flyers. 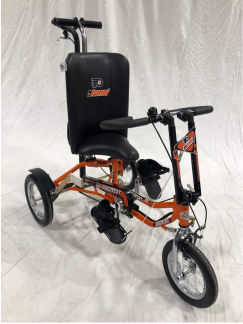 ” We are blown away by how perfect this is for her. And also, how lucky and blessed we are to have been given such an amazing gift. We probably would not have been able to afford a bike like this on our own. And we can’t help but think about how much Lucy would have been missing out on. This will help her in so many ways. It is just beyond generous and thoughtful and we don’t even have the words to tell everyone how much this means to us.”

“The Flyers have always been a favorite in our household. It starts with Mike, who has been a Flyers diehard all his life. We were so excited when we heard about the bike being Flyers Alumni themed! And when some of the guys showed up at our house, wow! We have been watching them play for years and obviously have known these men have caring hearts, but when Jim and Joe Watson and Brad Marsh showed up at our house on Christmas Eve to present Lucy with this bike — and then push her around our street.— we were just blown away. We were excited and also so touched and grateful,” Jaclyn said.

“Mike’s all-time favorite players are Rod Brind’Amour and Ron Hextall. He has so many players he loves watching now on the current team. My oldest daughter, Katherine, has been a fan of Claude Giroux and has been wearing his shirts since she was pretty young. He is definitely her favorite player! My son seems to like them all. I asked Lucy yesterday who her favorite players were, and she answered, ‘You know, the guys who were pushing me around our street!” She was referring to Brad and Joe! “So, think it is safe to say they are all our favorites as well. We all get a good laugh when we think about Lucy telling some of the Flyers greatest/toughest players what to do that day they came here. My husband chuckled that the Russians couldn’t handle these guys, but Lucy Brooks was directing them up and down our street! Again, it’s with all of that heart!”

Last year, Lucy got her legs casted in the PT department at CHOP in King of Prussia after her last round of Botox. She usually had her Gritty mask on when she went in for the appointments.

“She always had something funny to say when she was there. One of the therapists, named Sharon, contacted me a couple weeks after her last appointment and said she had heard of the opportunity for the bike. She said Lucy immediately came to her mind because of her Gritty masks! We were so grateful that she thought of us! She sent Lucy’s information along to Help Hope Live and Freedom Concepts and we heard from the organizations not long after. They have been so generous and kind and amazing,” Jaclyn said. 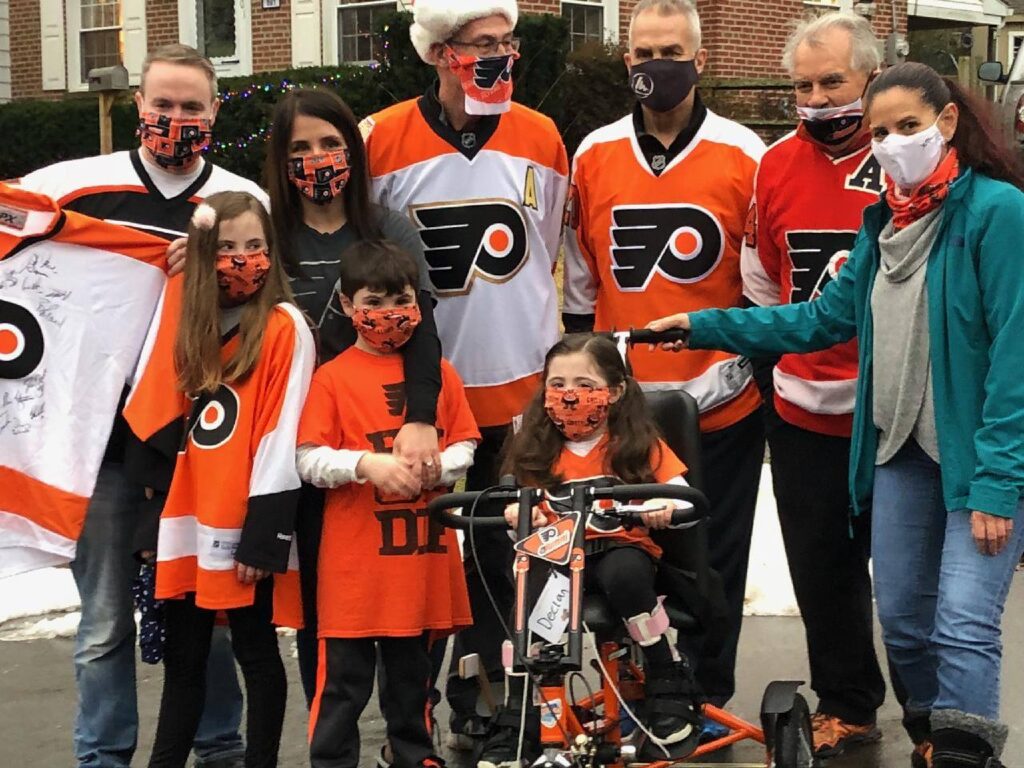 “We are so proud of her, and all that she’s done,” said Lucy’s mother, Jaclyn Brooks. “Her medical history is extensive and complicated. She’s been through a lot but she’s one tough girl.”

Lucy’s journey in her very young life has been anything but easy. But she takes her realities in stride, and has a love of life and an endearing optimism that draws others to her instantly. “Amazing little girl, incredible family,” Marsh said. “I’m grateful we’ve gotten to know them all.” The feeling is mutual, according to Jaclyn Brooks.

“Throughout Lucy’s life, we have come to see how good people can be. Her journey has not always been easy but it has been paved with some really incredible people. I don’t want to get too sappy, but Lucy has really been a light in so many ways. Obviously, she has brightened our world, but she seems to have an impact on a lot of people and situations. We have been so humbled so many times throughout her life by how much some people and organizations have offered and provided us. From thoughts and prayers, to time and concern/care, to services and foods…and now, something like this incredible bike! We are just blown away by the heart some people have shown us,” she said.

GIVE TO EVERY CHILD DESERVES A BIKE