On a year-round basis, the Flyers Alumni Association and its members take tremendous pride in giving back to the Delaware Valley community, off the ice as well as on the ice. That has been the case ever since the Alumni were founded in 1984 and remains true to this day.

Every year, the Philadelphia Flyers organization makes a donation to the Flyers Alumni to support the Alumni’s initiatives. On January 15, 2022, the tradition continued. Flyers Governor Dave Scott and Senior Vice President of Business Operations Cindy Stutman stopped by the brand new Flyers Alumni Lounge located within the event level of the Wells Fargo Center. They presented a $50,000 check to the Flyers Alumni Association.

“One of the real legacies of Ed Snider is that the Flyers organization is family – we always have been and we always will be – and the Flyers Alumni are the backbone of this franchise,” Scott said.

“We’re lucky to have so many Flyers alumni — from Brad Marsh, Bill Barber, and Bob Kelly to Danny Briere, Bob Clarke, and Paul Holmgren — in key roles in the organization.  They help keep us connected to our tradition, to our history, and to generations of Flyers and Flyers fans who have made this one of the most storied franchises in sports.” 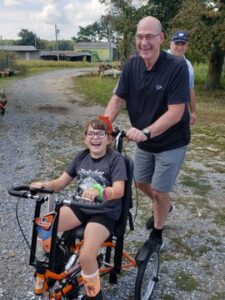 The Flyers Alumni’s two signature programs are “Every Child Deserves a Bike” and the annual “12 Days Christmas Giving” during the holiday season. The Alumni ardently lend support to the Flyers Warriors, Flyers PowerPlay, and Flyers Youth Special Hockey programs.   Additionally, the Alumni get together to teach youth hockey clinics, volunteer time for community groups, and raise funds for families and individuals in need.

Bob “the Hound” Kelly, who serves as the Flyers’ Community Development Director and is a longtime Flyers Alumni Association board member, upkeeps a packed schedule of visiting schools and hospitals.

“No one has logged more miles traveled representing the Flyers organization across the tri-state area — week after week, month after month, year after year — than Bob Kelly. Fans see him at the arena on game nights, meeting with fans and welcoming returning military members. I don’t think people realize how far and wide Hound goes on a daily basis. But even many fans who never saw Bob play for the Flyers know who he is,” said Flyers senior advisor Paul Holmgren, who is also an Alumni Association board member.

Marsh jointly serves as the Flyers’ director of Alumni/Community Development and the president of the Flyers Alumni Association. He noted that there’s a natural overlap between the work of the Alumni, Flyers Charities and the Flyers organization as a whole. Marsh now works regularly in direct tandem with Stutman, who serves as the executive director of Flyers Charities along with her Senior VP role on the business operations.

“The common thread is strengthening our impact in the Greater Philadelphia community.  To me, ‘community’ means anything that makes a difference to people outside the walls of the Wells Fargo Center. Cindy understands this, because she’s been part of the organization for more than 15 years, overseeing areas of fan and customer relationships. Doing our part in the community means having feet on the ground, fundraising and donating, and anything else that goes into building and strengthening personal relationships. Sometimes it’s directly through hockey, sometimes it’s by having a physical and financial presence away from the rink so people know you care,” Marsh said.

The “Every Child Deserves a Bike” program, which the Alumni launched in 2021, will be one the primary beneficiaries of the funding assistance provided by the Flyers.  Working with Help Hope Live to identify families with children who have severe physical challenges and would benefit from the use of adaptive bicycle, the Alumni pay for the construction of adaptive bikes fully customized to each child’s specific needs. The Alumni then donate the bicycle in person to the recipient.

“The adaptive bikes are life-changing for these children, who can’t ride a standard bicycle. It builds their muscle memory, strength and coordination. It greatly increases their confidence level as they learn to use it independently. And, as for any child, it’s just plain fun,” Marsh said.

“The thing is: adaptive bikes are very expensive to build and cost-prohibitive to many families. Depending on the specifications and degree of customization, a single bike can cost $5,000 or even as much as $7,500. The money the Flyers have donated to the Alumni this year will be a big help on top of the funding we obtain through Flyers fan donations and via sponsors. Much of that comes through the proceeds of our events during the year such as the yearly Fantasy Camp and the Alumni Golf Invitational.”

For 2022, Marsh said the Alumni Association’s goal is to donate one adaptive bicycle per month throughout the year.

The other signature program that Marsh and the Alumni have developed is the “12 Days of Christmas”, which was launched in 2019. Each year during the holiday season, over a span of at least 12 days (typically more), the Flyers Alumni Association donates money, vital supplies or volunteer time to charities, educational organizations or to individuals or families in need. In 2021, the Flyers Alumni made more than $37,000 worth of donations. 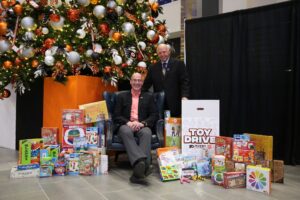 Example: On Dec. 14, 2021, at the Wells Fargo Center, the Flyers Alumni Association made a large donation of new unwrapped toys to the holiday Toy Drive organized by Flyers Charities and the Flyers Community Relations Department. Marsh and Kelly made the donation of $2,000 worth of toys — personally purchased by Marsh himself at a local independently owned shop that specializes in educational games, toys and puzzles. The donation filled two entire large collection boxes near the Broad Street Atrium entrance to the arena.

To revisit the day-by-day activities and learn more about each beneficiary, visit Community – Flyers Alumni. Other recipients included the Alumni’s sponsorship of a Sunshine Foundation child, Tim Kerr Charities, a donation of $3,200 worth of traditional holiday foods to St. Francis Inn in Kensington, Flyers Youth Special Hockey, the Flyers PowerPlay power wheelchair hockey program and many others.

“Every year, we want to make the 12 Days of Christmas bigger and better than the last. The Flyers’ donation is part of what will help us do that,” Marsh said.

“The Flyers organization, from the time of Mr. Snider and his first wife Myrna, and right up until today has always been good to us. The Flyers Alumni Association’s motto is “a Flyer once, a Flyer always.’ When we have our biggest events, we have participation from, quite literally, members of every generation of Flyers history. That’s rare, but it comes because we all have one common bond. We’re all Flyers. There’s a big difference between calling yourself an ex-Flyer and calling yourself an Alum. The difference is that, with the latter, it’s an ongoing relationship. There’s a bond.  But like any relationship, it takes commitment to upkeep it and nurture it. There aren’t many NHL franchises that do for their alumni what the Flyers do for us.”

Marsh said that Flyers organization give back to the Alumni in a variety of different ways beyond the yearly donations. One is via free tickets to any game for Alumni and their guests.

“Just the other day, I heard from an Alum who played for several NHL teams. He was up with the Flyers for part of one season and with the AHL farm team over several years. He contacted me to let me know he was traveling to Philly — he no longer lives in the area — and ask if he could get tickets for a game later this month. He also asked if he could have access to the Alumni Lounge. I told him, ‘No problem.’ We’ve welcomed many Alumni who appeared in one or two NHL games as Flyers to come to games or to suit up for our Alumni Team games. I always say the same thing. ‘Of course we want you here. You’re one of us. You’re a Flyer,’ That bond simply doesn’t exist in many franchises,” Marsh said.

Flyers Alumni attending games have the ability to eat for free in the Center City Club, where they can mingle with fans. They also enjoy open access to the Alumni Lounge, which opened this season.

“The Alumni Lounge is kind of our inner sanctum on the event level,” Marsh said. “It’s designed for the exclusive use of Alumni and Alumni guests. I’m biased, but I think it’s a pretty special place. I’ve gotten very good feedback from the Alumni who’ve been in there. When we had the Hall of Fame Game at Wells Fargo Center in November, the day before Tocch [Rick Tocchet] and Homer [Paul Holmgren] were inducted in the Flyers Hall of Fame, a lot of the boys got their first chance to see the lounge. We’ve added some new items to the lounge since then, such as trophies.” 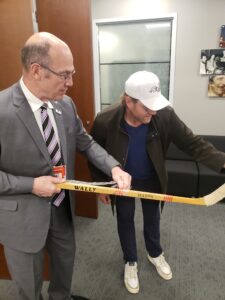 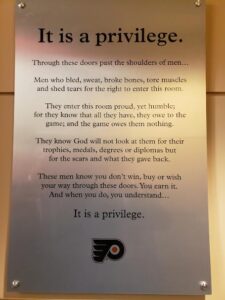 Within the lounge, Alumni sit on plush couches, enjoy catered food and beverages and have access to watch large flat-panel television sets. They’re surrounded by photos, memorabilia, artifacts (such as the original “Holmgren/Cashman Gate”) and game-used sticks representing the entire history of the organization from 1967 to the present day. Each year, a current team photo will replace one from the previous season and will hang side-by-side in the entrance way next to a large-scale color team photo from the inaugural 1967-68 season.

Added Scott, “Building the lounge is just another way for us to show our appreciation to our Alumni and make sure they have their own, special place here at the arena to spend time with their families and each other.”

Flyers franchise icon Clarke stresses that the loyalty is a two-way street. Ed Snider created a legacy in which players continued to feel loyal to the organization long beyond their playing days. The Flyers did right by the players and their families. Likewise, for an alumni group to keep a strong foundation, there has to be an ongoing connection between the NHL organization and the namesake alumni association.

“The Flyers’ support of their Alumni is critical to the success of the Alumni Association,” Clarke said.

For this reason, the Flyers Alumni Association believes that it owes a debt of gratitude to Ed Snider by supporting his legacy project: the Ed Snider Youth Hockey Foundation. In early 2016, a few months prior to the passing of the Flyers’ patriarch, the Flyers Alumni Association pledged to raise and donate $2 million to Snider Hockey. The funds were to be directed toward a capital project for rink facilities used by Snider Hockey children.

In 2019, an extensive renovation project at the Class of 1923 Arena was completed. A Flyers Alumni vs. Snider Hockey Alumni game at the overhauled West Philadelphia facility celebrated the accomplishment. The game was held one night prior to the 2019 NHL Stadium Series match between the Flyers and Pittsburgh Penguins at Lincoln Financial Field.

“It starts from the top. Mr. Snider instilled that from the beginning that once you’re a Flyer, you’re always a Flyer. I’ve heard that even before I signed with the Flyers. Everyone knew around the league that he was known as the top or the best owner in sports. So it starts from the top and then it trickles down and you see so many of the players being involved and staying around. It’s fun to be a part of that family,” Briere said. 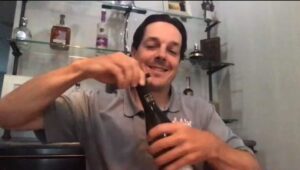 “Events like these are our way of saying thank you,” Marsh said. “Thank you to Mr. Snider, for all he personally did for us. And thank you to Flyers fans for how the city embraced us.”