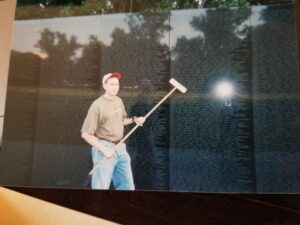 “Joey” is a 100% disabled veteran and dealing with lymphoma but wanted to participate in the Walk, Run & Stroll, which raises money for the Philadelphia Flyers Warriors and the Doylestown – YMCA of Bucks County’s Veterans Wellness Initiative.

“I grew up playing hockey in Philly. The 1974 Stanley Cup club was the team that drew my passion. I attended both parades. Although I played defense, my favorite player was Bobby Clarke, I copied his game because we were the same size and I admired his work ethic,” he said.

“I graduated from Neshaminy High School. Went into the Air Force upon graduation. I got stationed in Germany and played in the city of Kaiserslautern. I was one of 2 foreigners able to make the team. The other player was from Czechoslovakia. This was in the German 3rd Division (Oberliga). During this time, I was a member of the Armed Forces national team for three years. 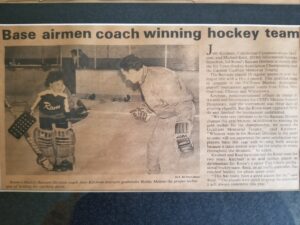 “I returned to the States and was stationed in Rome, New York. I made the Senior A team and played for the Copper City Chiefs where we played in Ontario. It was there I received an academic grant to play for the University of Western Ontario. I believe I am the first player from Philly to get a such a scholarship. This was 1982. Later I was a volunteer hockey coach for 25 years. I was not interested in receiving money, just to fulfill my passion of hockey that I got as a child watching the Philadelphia Flyers.”

Robert, thank you for joining the Flyers Alumni Team for the Walk, Run and Stroll!